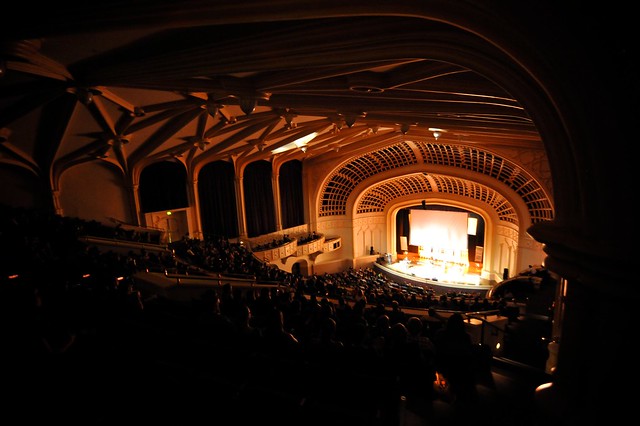 It has been almost two months since TEDxBoulder 2013 and I realized I didn’t post a event wrap up. I have not put time into writing since the travel book came out and I need to get back on it. So a quick recap: TEDx is the independently run local version of TED. We have very little, if not zero contact with the organization and have to follow a long list of rules to use the brand.

George Morris and I co organize the event and I often say my favorite part of the event is working with him. 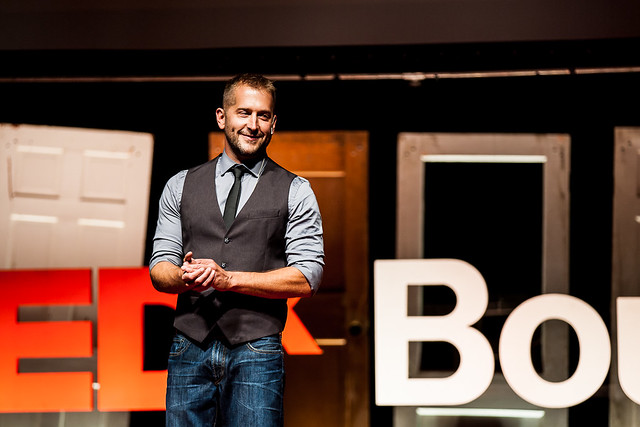 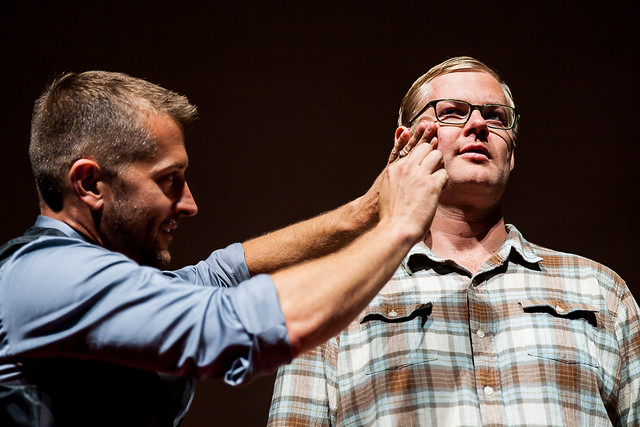 Some quick setup facts: our event is seemingly the largest TEDx event in the world at 2200. We have a team of seven that works on the core team. We met four times and did the rest of the organizing over email. I put a large amount of trust in a team that is empowered to kick ass, and they do just that. Our event was one week after the floods that wrecked havoc on our community. I had over 19 inches of rain on my house (and lucked out without much damage) but every street in our community was different. It was a disaster that uprooted peoples lives, homes and jobs.

I live in Boulder after traveling to 40 countries because I think it is one of the most interesting places in the world. Watching the community rally around helping each other is something I won’t forget. As an event organizer with 100% of the liability (if the event was one week earlier I would have lost $50,000) this couldn’t have been worse timing. The lead up week to an event is the most important week, and my attendees (and myself) were shoveling muck out of basements, pushing wheel barrows and worrying about the hundreds still trapped in the mountains.

We thought of canceling the event many times. People just lost their lives and homes and we want to put on a 2000+ person event to feel good / share ideas. We thought about it a long time (for me it was in the middle of the night as the rain was pouring down) and decided to go for it. George was supportive. The team was supportive. The speakers were ready to go. I had to get on stage in the place I love to face the people I would do anything for and say “hey, we are all here, we are all ok, we are all better because of who is around us right now.” 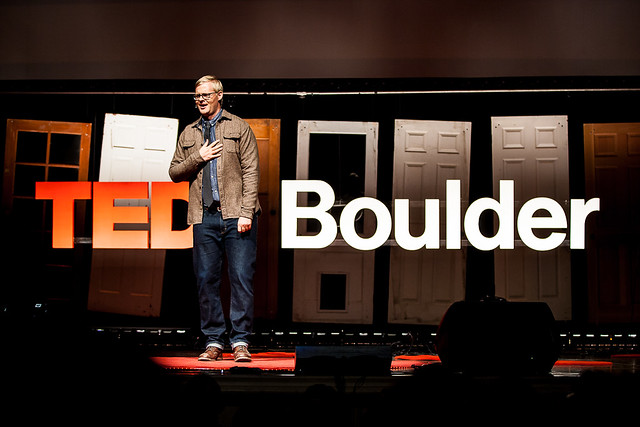 I open the event with a six minute monologue. I had to read the crowd. I had to say “we all say a dark and light side to Boulder this week” and pay respect to the serious situation. We needed an event though. Events have powerful ways to let you think, act and feel a little bigger, a little bolder.

About two hours before showtime the soundboard blew up. We usually do sound check for the speakers and instead we watched the Macky staff run around trying to fix something imperative to communicating to a room that big. The crew somehow fixed it, thankfully. The show must go on. All the things I learned from putting on student plays in Middle School and beyond played off. I stayed cool, everyone kept their cool. Doors opened and we started the show.

The most important point of the night for me was meeting Charlotte, a little girl who was suffering a seizure every twenty minutes of her life until, well, the Stanley brothers developed a strain of weed with no THC and tons of CBD’s. At the end of the talk she walked onto stage with her parents to a standing ovation. She started clapping back. There were not many dry eyes in the audience. 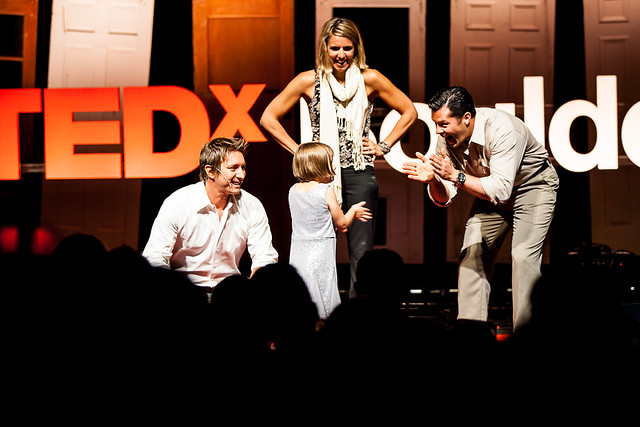 The night featured 14 speakers and three musical acts. We had several mic failures during the night. That is why you see Josh and Ash holding hand held mics. I did my best to roll with it and at several times got uncomfortably close playing “human mic stand.” 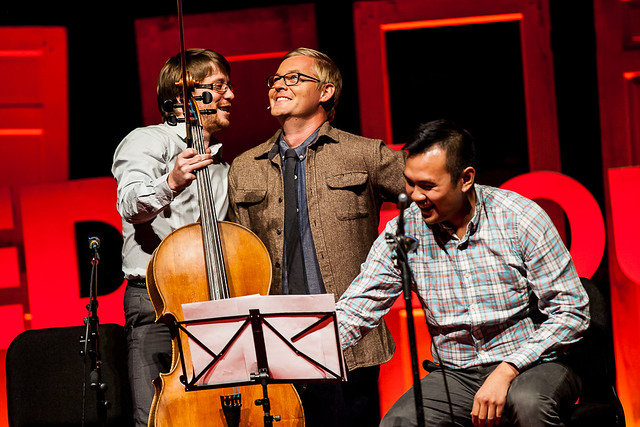 We celebrated the arts as well as the talks, here with Phil Norman.

The night had a great flow to it. Two 90 minute sessions with an hour break for people to meet. 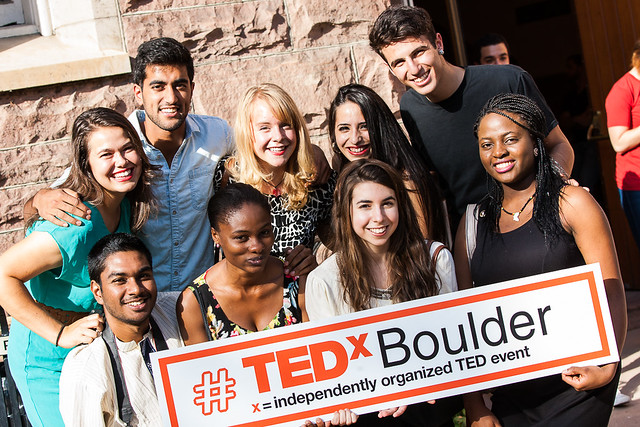 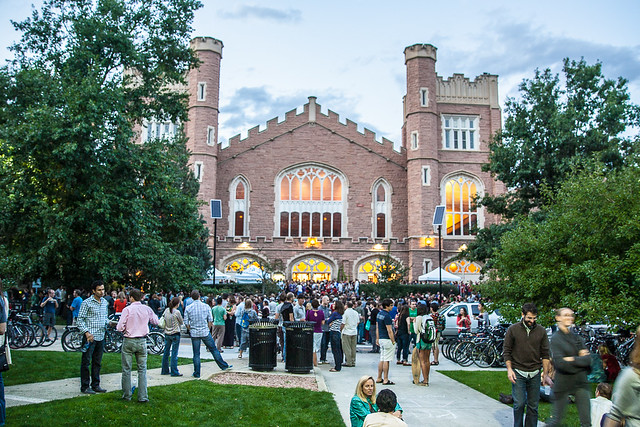 Check out the color / reflection in those windows. That blue sky was a beautiful thing to enjoy.

I’m incredibly proud of our team and speakers. We pulled off an event when the community needed it. We were able to donate over $15,000 to flood victims and charities.

After the event we received a great deal of feedback and personal stories. This email was from Deb, who was hit by the flood hard and was one of the many that we gave a ticket to:

Your fearless crew leveraged our shared circumstance to create a larger opportunity for profound heartfelt community collaboration, it was amazing, I will always remember how it felt.

I happened to be in Mackey to see Garrison Keillor a month after 9/11. The packed house was ready and needed to connect more fully as a community. On that day, Garrison wasn’t able to meet us – I understand of course, but felt an important moment for healing was passed by. With TEDx you embraced it and allowed a wonderful thing to be mutually created.

Events are important. Community is important. Everyone should feel welcome, valued and above all respected. The cornerstone for any event I put on, stage or attendee. Over the past four years our stage has been gender neutral and over 25% of our speakers are proud members of the LGBT community. Welcome. Valued. Respected.

We had our closing wrap ups of the event and everyone was proud. George and I started plotting next year and then Ash’s talk…. well, it was worthy of some ups. 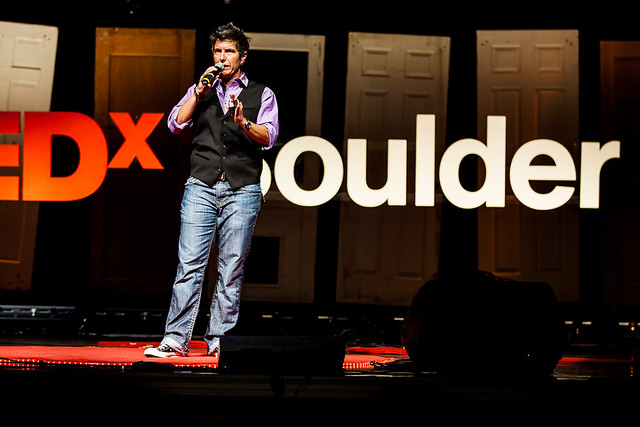 Ash gave a fantastic talk about equality and closets perfectly weaved in a narrative built by the community.

It has over 3.1 million views right now thanks to Upworthy, and by the end of the week should be the most watched TEDx video of all time. That might rank as one of the most impactful things I’ve ever been a part of. As much as we celebrate this video and this message I have to be a bit honest: big hits like this don’t drive me. It was the little moments of that night in September that keep me working to build bigger and better events. Here is a full list of the videos. 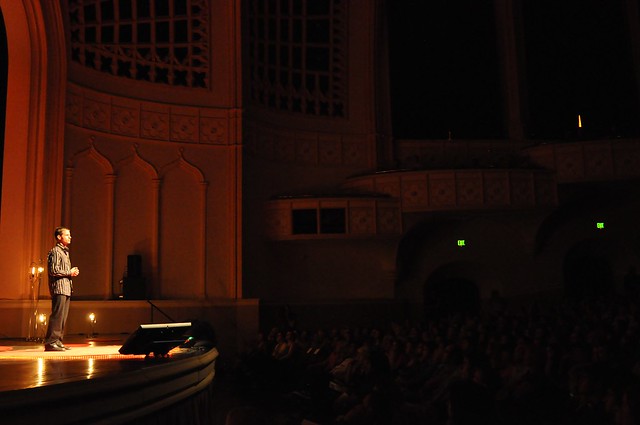 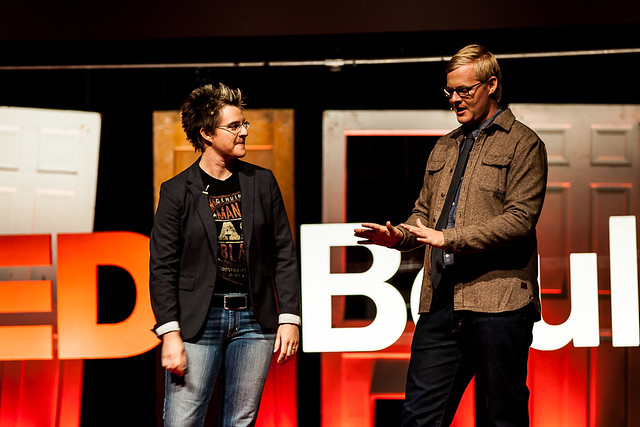 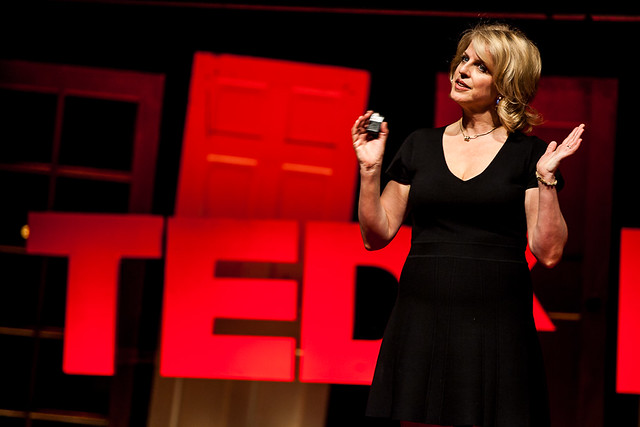 Jackie gave birth to a beautiful girl just over a month after TEDx. 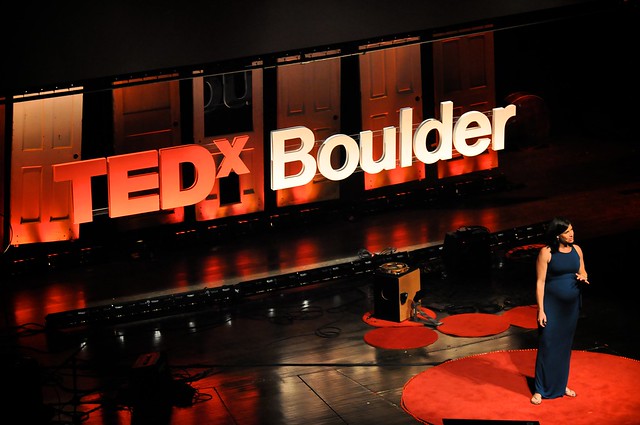 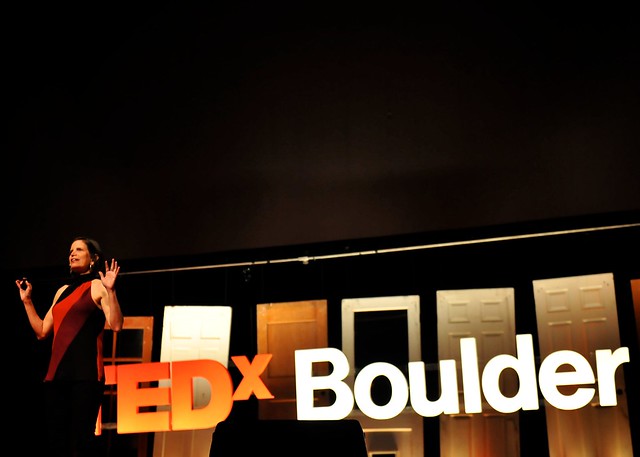 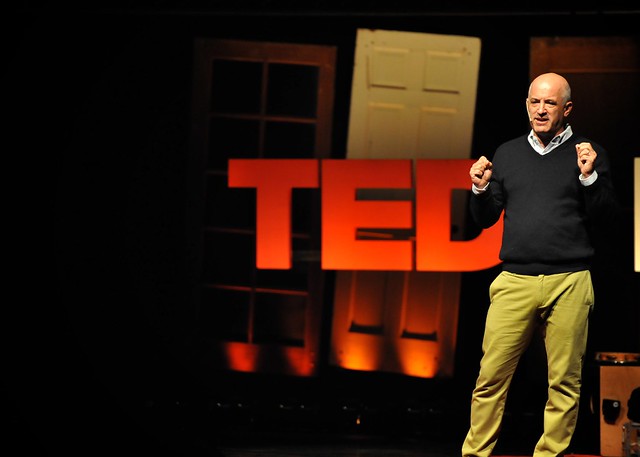 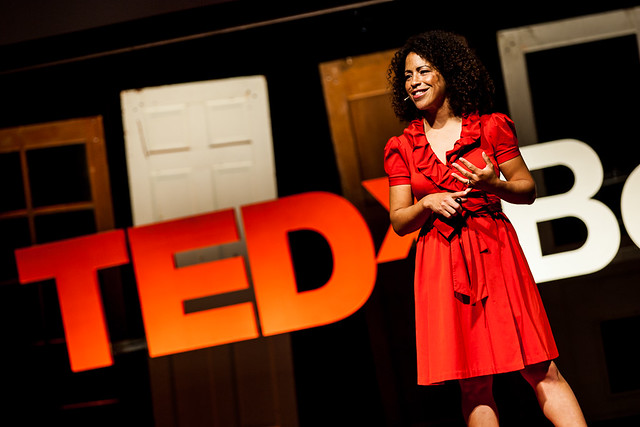 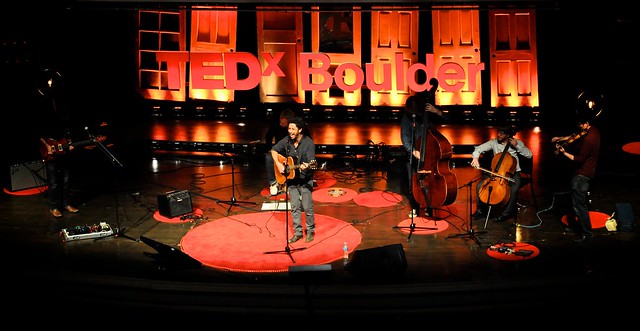 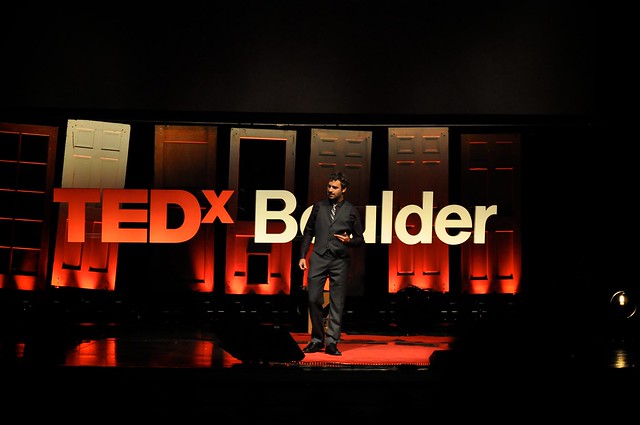 Thank you to everyone that played a part in this event.

One response to “Celebrating TEDxBoulder 2013”