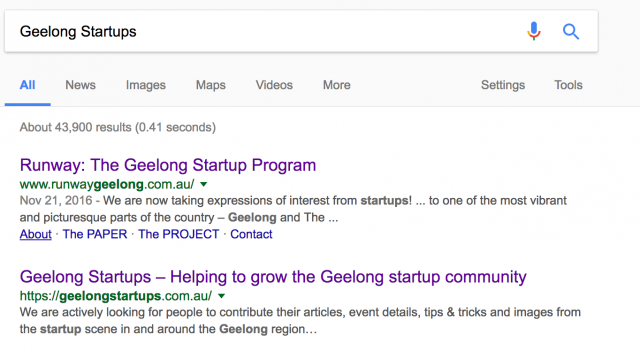 Part of my EIR with LaunchVic in Melbourne, Victoria has been meeting with anyone who wants to meet to get a better feel for the community.

One of the more interesting meetings was with the entrepreneurs from Geelong. “Where is Geelong?” was my first question. I’m not from here and it shows. Geelong is a 45 minute drive from Melbourne and is on the other side of the bay. In Australia it is well known.

“How would I find you if I was new to Geelong?” was my first question. Later that day they set up a home for startups in Geelong.  It’s a home for news and celebratory points from the community. Share the wins of other companies and big moments of the community. It’s a welcoming place to let you know that there are others just like you. If you are a startup community you should have something like this that 1) is positive 2) is unowned, and 3) has a direct way to get involved (next meetup time).

“How do I know what is going on in Geelong?” was question #2. They invited me to a monthly founders dinner where 10 startup founders met and shared goals, hardships and wins. Being a startup founder is super tough and doing it alone is a suicide mission (source: I’ve been a solo founder). I attended this event. It’s hard to be in that room and not think of the early days in Boulder with a handful of founders and an “it can happen here because we say it can happen here” attitude.

“Is there really a movement here?” was my final big question. For one, they have a well funded quality accelerator from LaunchVic and others named Runway. They have a monthly dinner series run by Max Bush and funded by Nick Stanley. Those 10 startups that show up every month are welcoming and supporting of the realities of their efforts. I’m not sure if you will see 100 or 1000 founders come out of Geelong over the next few years but you are seeing an incredibly solid building block for them to succeed from.

In the end, that is all you could wish for.

I’m a fan. Keep up the amazing work Geelong.