So Vail in their marketing brilliance wanted to bring attention that their epic pass includes entry to 26 (yes twenty six) resorts around the world. To celebrate / promote they promised Epic Passes for LIFE for the first 10 people to ski or ride all the resorts this year.

I’m good at challenges. I’m fantastic at traveling, have flexible work schedule and enough frequent flier miles to cut the airfare cost of this feat to under $600.

And I’m struggling to decide if I want to do this.

On one hand: a great challenge and a chance to ski with some extremely interesting people. On the other hand, I’d have to cancel a trip to Iceland with my girlfriend and Thanksgiving at my house would turn into “who wants to go skiing every day?

Basic rules are one resort a day in the US, two a day in Europe. You must upload two photos and a video from each resort.

Here is the schedule I’m playing around with: 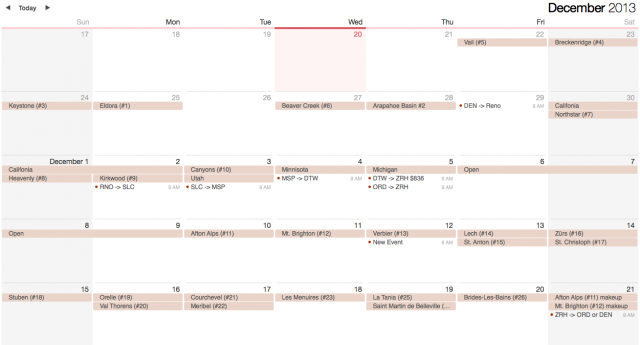 December 20th is the quickest you can complete the challenge as that is when the final resort, Brides-Les-Bains, opens. This is a main concern for me, as there are so many open days that you can really fool around. I’m thoroughly scared of a bottleneck at the end of the race with 50 racers trying to upload their photos and video to end the race. A race that covers four countries coming down to upload speed. It would really be a horrible thing to finish out of the top 10.

Last night I had the discussion about what would happen if I tried and didn’t win (mainly, didn’t win because of the final day. I would be pretty unhappy with that outcome, so unhappy that even the though makes me not want to race. That, in my mind, makes me a pretty unideal racer. I have talked to about 20 other racers aiming for the December 20th finish and, well, I just stress out too much about this.

If I were to do it, here are some planning tips for others:

Colorado first. Beaver Creek opens on the 27th, so it is possible to have all of them completed by then. Flying from DEN to RNO. Southwest does a direct 8:55 PM 10:25 PM for $136 and includes skis. Three days knocks out Northstar, Heavenly and Kirkwood. RNO -> SLC on Delta non stop $295 (RNO 4:59p SLC 7:23p). So you can ski Canyons on December 3rd, head to the airport and head MSP. Now SLC -> MSP has a direct (and I only would want to take directs with a short time frame / less chance of my gear getting lost) but the direct is over $800. I would take the 5pm United out of SLC to DEN, stay the night here (I live in Boulder), leave on the 8:15am flight getting us into MSP at 11:15am for $179. This provides an easy out if I get injured / make a stupid mistake and gets me close to Afton Alps and Mt. Brighton. Word on the street is both of these hills will be open in time for you to go even earlier than this, but December 5th and we have knocked out all the US resorts.

ORD-> ZHR would be my flight of choice. Swiss Air is awesome, will take your skis for free and you can book this one way for 30k United points. The return is tricky because 1) you don’t know if everything will go to plan 2) December 20th ish is in prime time expensive holiday flight territory and 3) you might have to do some makeup with Afton or Brighton. My strategy would be a round trip ORD <-> ZHR on Swiss. $1005 when I looked last week, $1535 as of right now, it could come back down.

In Europe I’d knock off everything ASAP for the slight chance Brides-Les-Bains opens early. Most are not doing this, but being in Switzerland on December 4th would feel good. You would be on top of the leaderboard and can easily knock out Verbier and then the Austrian and French resorts.

Now the official (well, yeah) opening dates list shows that this isn’t possible, but if it were you could pull this perfect line:

With smart flight booking you don’t miss a day of skiing in the states, one day rest as you are flying to Zurich (and if you wanted to push it you could get to V after you land at 10:55 am (7:10pm ORD-> ZHR direct lands Friday 10:55am).

So you could get to the end of the race by December 11th. Well, you would have two resorts opening on the 14th, La Tania and Saint Martin de Belleville.

And then you would wait for Brides-Les-Bains and hope for an early opening.

An ical friendly version of this calendar is here.

A lot of early competitors have been *super* quiet and not wanting to share information with other racers. Fuck that, we are playing in the winter in some of the most beautiful places in the world. Share as much as you can with each other and be fantastic to each other.

I think there is a 30% chance of me starting this. I think, oddly, I’ve had almost as much fun planning it as I would doing it.

Oh, and there is an awesome update from Vail:

“Photo/video locations for Brides-Les-Bains will be announced on December 20th – a) posted to the website and b) available for pickup at the Brides-les-Bains tourist office that morning.”

So December 20th will be a showdown / scavenger hunt on Brides-les-Bains… almost worth the flight to see it. Who else is excited about the race? What other tips do you have?