I’ll start this post with a quote from my book:

I thought of Tizio. Is life and love, I wondered, anything more than a fractal created through a base of habits, interfacing with the turbulence of the world?

So on Monday I wrote about my displeasure of Amazon’s Kindle Store charging authors (all authors, although I listed indie authors, this goes for publishing houses that reached out too) for delivering the kindle file. They are the only store to do this, and mark it up 129,000% from their web hosting costs. Many pointed out that I shouldn’t be surprised, as it is in the TOS. True!  It is. It is 129,000% markup for everyone, if your book is .01MB or 50MB.

I posted the post it after more than a few drinks on Monday night. I had a (drunk?) feeling it had legs, and it sure did.  55,576 unique visits to the post with just over 90,000 pageviews. To put that into perspective, it was 1/6 the youtube views of Jedward’s new song, Young Love.

I’m trying to be as helpful and open as possible so other indie authors can learn from my mistakes.  Here is a journal with some quotes from the website and a quote that struck me / said it well.  I’m also showing the traffic numbers (oh how I wish I had some data like this before I launched).  Here it is in graph form: 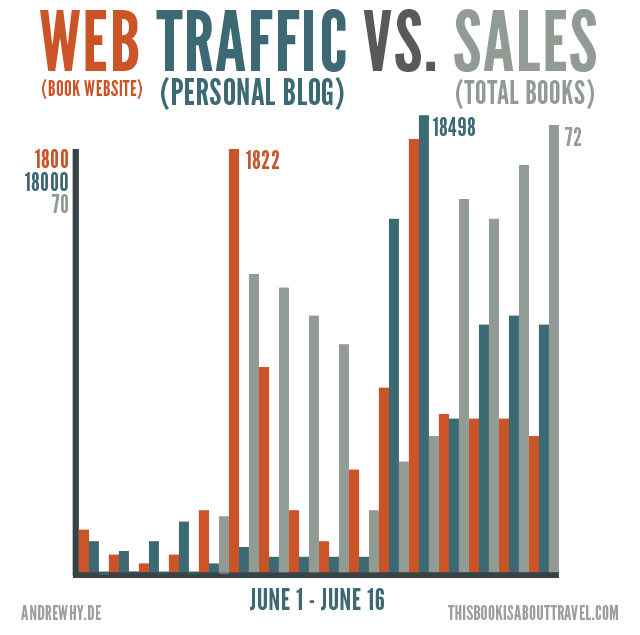 Traffic does not equal sales, although it sure does help.  My top traffic day was one of my lowest sales days.  An exciting 16 days for sure.  My book launched! A very proud moment. I wish I tracked / could track the notable Twitter and Facebook discussions. Tweets about the post as of now: 947.  Facebook shares: 799.

Here is the story of the week:

There is a huge disconnect between the attitude of “any price that people will pay is a fair price” and the fact that economic systems require that parties engage in transactions in good faith. To me, it seems blatantly obvious that Amazon is engaging in the bad-faith practice of trying to conceal the true costs of their service by loading a lot of the price into a “delivery charge” that is absurd. –mycroftiv

Oh my, Cory Doctorow wrote about the post.  I’ve been reading Cory for years… what an honor.

Andrew Hyde wrote and self-published a great-looking travel book and put it up for sale on Amazon, iBooks, B&N, and an indie marketplace called Gumroad that retails the PDF. The book had an exciting launch and the sales on Amazon were really high, but he got some sticker-shock when he found out that Amazon was charging very high “delivery fees” for his books, even when the buyers were buying from WiFi.

At this point the naritive of the story split between two camps:

Amazon offers high royalty rate to you, but that’s before a grim hidden “delivery fee”.

The Domino Project ~4500 visitors (hard to track, most via their newsletter)

One of the things that’s happening in 2012 is that self-publishing of books is no longer a quirky outsider effort, but instead more and more often being seen as smart alternative to getting picked by the mainstream houses.

Seth Godin (publishing superhero) wrote about the post. We exchanged a few emails as well with suggestions of lowering the price / giving it away.  First time author here, should listen to him more.

At this point of the process traffic was going nuts.  Two straight over 16k unique visitor days. Tons of emails, comments and other service messages.  Exciting, but sales were not going up, at all.  People were getting their first sight of the book though, and this is important.

Amazon has charged delivery fees for as long as they’ve offered the 70% royalty rate. It’s not at all a secret, and in fact you’d have to work really hard to not know about the fees. To be honest I do not see how you couldn’t know about the delivery charge after having chosen the higher royalty rate; all the info is on the same page. Nor is it hard to find.

Shocked I tell you.

An Author’s Elaborately Illustrated Discovery That Amazon’s Markup Of Digital Delivery To Indie AuthorsIs A Mere 129,000%

This (as far as I can tell) started the tumblr links.

The feeling that your favorite writer is standing at a box in a park just yelling random dribble at passersby hoping someone is listening.  That feeling.

I hope in the author’s book they get to the point quicker than they did in this blog post. -Bibliofuture

This is a total celeb gossip blog, love it.

What he found is that a ten-dollar ebook with lots of pictures brings home quite different earnings, depending on the vendor. In particular, he got hit — and hit hard — by Amazon’s delivery fees. His 18 MB ebook costs him US$2.58 per Amazon download, which is a substantial overhead.

According to one indie author, Amazon doesn’t offer such a great deal when it comes to self-publishing. While his complaints have merit, he may have forgotten to read the fine print.

Another jaw of floor moment.  I have been reading John Gruber since 2004.  He linked to the piece with a nice and short comment.

I still snicker when I see author next to my name. Gruber!!!

It’s an interesting space, and everybody is reaming each other while they can. Soon the reamers and reamees might be different, but that’s just publishing evolving. –BlackLeotardFront

Of all the places that linked to me, Metafilter readers purchased the most books.  Thanks Metafilter!

A rising star in the tech field, The Verge shows why with their thoughtful coverage omitting the sensational parts of the story.

When looking at Kindle Direct Publishing’s advertised 70 percent royalty rate, one would assume that 30 percent of each sale would go to Amazon with the rest going to the author. The service’s pricing page specifies that Amazon’s percentage does not take into consideration delivery costs but, since it’s digital, the added fees should (at least theoretically) be minimal. On the contrary, Hyde calculated that Amazon was charging an average of $2.58 in delivery costs for every sale of his $9.99 book.

Here’s a must read for any cartoonist contemplating creating and selling an ebook of their cartoons on Amazon’s Kindle market.

Meet the new boss, same as the old boss.

The lowest take home of the bunch? Kindle, which initially gave Hyde just $5.10 of every $10, thanks to an average “delivery cost” of $2.58 (on top of Amazon’s 30 percent cut). After re-optimizing the file, he now takes home $6.42 per book, but his experience is still a startling look at the reality of self-publishing.

This is very much worth reading, if you’re an indie author or someone who wants to support indie authors.

I keep a close and interested eye on the world of ebooks, and I’m pleased to report that it keeps getting weirder.

What Amazon thinks matters. They remain the big dog of the book industry. The Kindle has dwindled from a vast majority to a small minority of Hyde’s sales — as he puts it, “Kindle Sales Vanish When Users Know About Their Fees To Authors” — but that’s a special case. With ebooks, at least in the USA, Amazon’s Kindle is dominant and everything else is irrelevant. Which ain’t necessarily so bad; some self-published authors are making a pretty good living off the Kindle ecosystem.

Jon Evans is also an author (and has some fantastic books, check them out). His post on TechCrunch was fantastic providing real numbers to the fallacy of free debate that Seth Godin supports so much. That one thing you heard worked for that one person on the blog? Yeah, might not work for you.

So now I start another exciting week of selling books. It will hard to ever top last week. Total books sold? 775. Higher or lower than you thought? Anything surprise you?

this book is about travel, Travel