A deep depression hit me about an hour into my visit to Nepal and lasted for the first two weeks. Nepal, as a travel destination, is nothing short of raved about. “The Himalayan Mountains are majestic and the people are the nicest in the world!” was a common travel tidbit I heard. What I found was a developing nation with deep problems becoming worse by the month with tourism hastening the poisoning of the well. The pollution is the worst I have ever seen. Air, land, sound and water, nothing is spared the careless trash. The people are wonderful and also skillful about exploiting the tourist scene. Everyone you meet has a friend that is in the business of what you want to do, and they have a vested commission in getting you to open up. 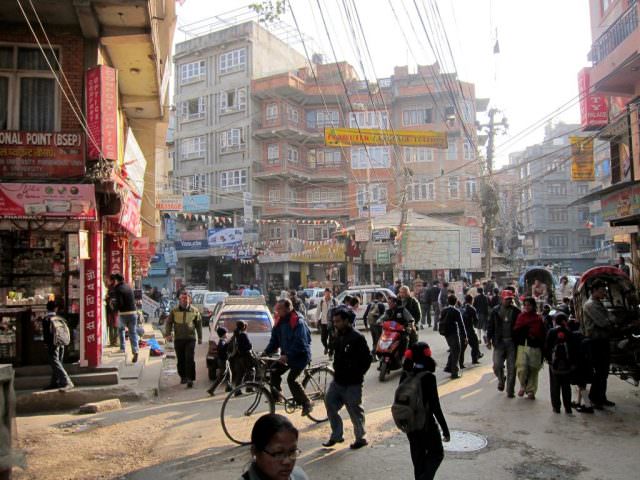 So much of this place is changing, generally for the worse. You can see the mountains from Pokhara, but the smog makes the view, well, depressing. Kathmandu is thriving from tourism, but at the expense of the country workers leaving to find easier work (and often times they can’t get it, resorting to black market and corrupt jobs).

The horns on the motorbikes are non-stop. The taxis will take you for a ride and to your destination. They view cheating tourists as a right, a recent newspaper article boasts.

I wanted to leave within a week of getting here. Let me rephrase that: I wanted to leave and start a campaign to stop tourism in Nepal. There was no redeeming value. It was soulless, corrupt and destroying everyone that touched it. Not something I want to be supporting, in reality or my dreams.

“Merry Christmas, sir!” a older man told me later in the frigid night. 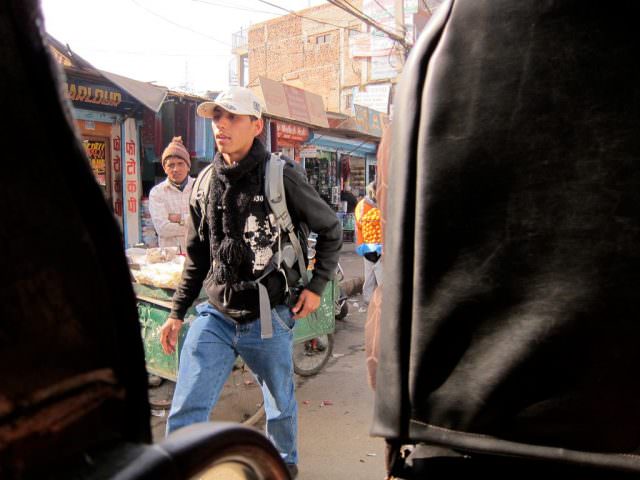 City is city. I get this. This happens. Pollution happens. Black markets happen. My dream of this place happened, and it was far, far off from what actually is here. The political democracy is on a thread, and a saving grace is the blancas that come here to spend their money. Nepal is developing, there is no doubt of that.

The bus ride from Kathmandu to Pokhara is a very direct reminder of how developing the country is. More than 10 police checkpoints stop every car, bike and bus to check permits and tolls. A six-hour ride passed (formerly) amazing views of valleys, rivers and mountains. There is also a police paddy wagon arresting vendors, drunks and teens (by random it seems). The motorbikes don’t obey the road closure rules and honk at the mob walking down the street. “Get out of my way!” their imported ultra-loud horns say. 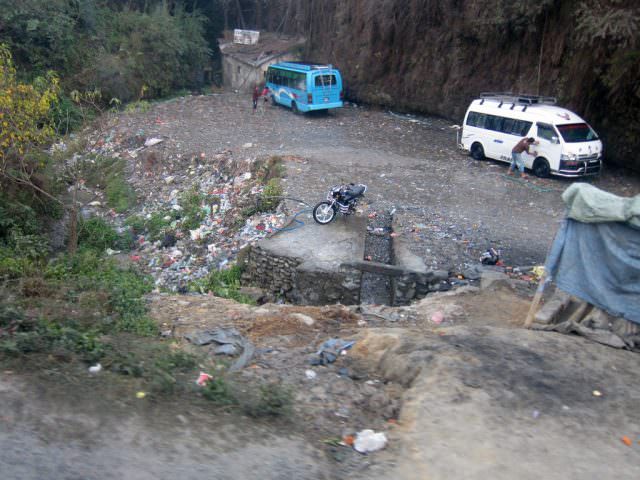 Everything seems to be just this: an urgent cry. The rural areas of Nepal, I shall learn, are extreme in their land and experience. I met a mother that had 12 children living, and had buried eight. The eyes of people around town are full of salesmanship or despair. An old lady sells me some beads, which are made by hand and support her family trapped in Tibet.

“That is full of shit!” my guide tells me, yelling at the widow. She scatters, and I am told that the beads are from China, and she just does what sells to the tourists.

Everything isn’t as it seems. Isn’t how I fell in love with Nepal. The lore just doesn’t match up.

Time to get out of the city. Annapurna Circuit is on my life list. 220 miles circumventing some of the tallest mountains in the world. Every town along the way has tea houses to welcome the trekkers (60,000 strong per year as of 2009). Wilderness, I hoped.

As with most of my hopes in Nepal, it was quickly smashed. There isn’t much sense of wilderness here. Can we make money off it?

Develop it. Rice fields can fit on most hillsides, put them in. Trash was everywhere (and not tourist trash, local trash was the stuff on the ground). You can see why: A young girl asks every trekker for chocolate as they walk by. She unwraps it, eats a bit and drops the wrapper on the trails. This joins the 10-50 pieces of trash per 10 yards of the trail. The full Annapurna Circuit is 220 miles, and at that estimate, we are looking at 352,000 to 1,760,000 pieces of trash on the trail.

Wilderness. Nepal’s tourism is built on the trekking. You pay a visa fee on entry to the county, and a “conservation fee” for the assumed conservation. Nowhere to be found.

The dark secret of wilderness around the world is that the land is usually not developed because it is too hard to profit off of. The Himalayas are off limits, but the wooded areas around it are not protected.

The tea houses in towns welcoming you? They are just hotels, built for the trekkers. There isn’t much past the towns, other than the hotels. In most we visited, there wasn’t anything besides that. 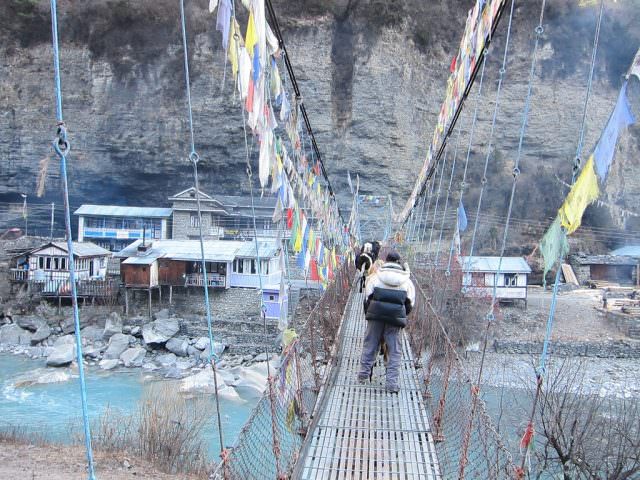 Trekking on the most hated road in the world. The road. 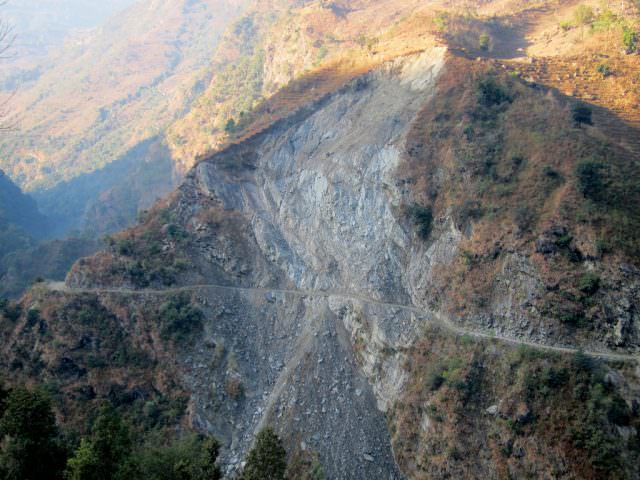 The road is going in at the strong urging or citizens of Manang. There are 3000 full-time residents, and with stories of hundreds of children being saved with a modern road in and out, convinced the government to put in a road. The road conveniently goes exactly on top of the trekking trail. Where the road is built, the trail is gone.

Now, if you are a person that can do third grade math, you can figure out that the road will carry, at capacity, the same amount of tourists that currently hike on the trail (averaged out).  One car per three minutes with eight passengers on a road that is unstable at best.

The guiding services expect trekking to go up when the road is completed. On day six, right past Tal, we saw the road being jackhammered into the hillside. “Awful young,” I thought. “It is a good job” my guide said (as the last official thing said as my guide). We passed a group of 20 youth, aged 6-10, high up on a hillside clearing the blasted land from the army. The tourist funded army. Yes, come to the mountains, and see the whites of the eyes of the child labor you are supporting.  I’ve never seen eyes so cold.  So hurt.  So helpless.  They are doing a very hard job, unsupervised, with almost no pay as a replacement of their childhood.

My guide learned a valuable lesson about unfair and dangerous jobs: If you support it, you can lose yours.

If you hike the Annapurna, you support, directly, child labor. They might hide it during the high-season, but the ugly and shameful beast is there. The knock-off brand-name jacket you bought in Kathmandu are made by a different tragic set of small hands.

We are in the last years of the Annapurna being a place where people trek. The inevitable road is set to be finished in 2014, with buses and jeeps honking and smoking up the valley. They are aiming to have 150 vehicles per section, per day. To my surprise, they don’t expect trekking to go down.

The powerlines cover the entire valley until Manang. A 42″ flatscreen TV is displayed in the kitchen/bedroom/bathroom of a teahouse. The fire rages on, but with no chimney smoke hangs at waist level. The 10 people in the room don’t seem to mind, but their daily environment is killing them. We pay our conservation fund-approved menu meals and hike on. The road is the only way to get up the valley, conveniently, to the next town. Let me Photoshop the power line out of that pristine Himalayan view.

I sit down in Manang for a veggie curry. I’m excited to meet the residents of the town that resulted in one of the classic hikes in the world becoming a jeep trail. I was quickly joined, at 11am no less, by a group of five drunk and high business owners. The all too familiar get-to-know-the-tourist-before-selling-them-shit game is played. It is around zero outside. No insulation to be found. This week, eight Nepali die due to the cold.

“You want good weed, you come to Karma.”

The inevitable road is being built and supporting this, and this alone. There is a small town that used to be here. It has been swallowed up by the tourist trash, forever gone. The army is blasting an amazing amount of rock into the river below.

I’m learning the hard lesson of how tourism can destroy.

It is January. It is the coldest week of the year. It is 14,000 feet above sea level, and there is no snow. We walk over the 17,769-foot pass without stepping in a spot of snow. The glaciers have receded back as far as they can without disappearing. We make it over the pass. It is one of the slowest days for traffic on the pass, an officer tells us days later. Six people, guides included. “In October you can see 1,000.”

The majestic Nepal is dead to me, to a lot of people, many of which live here. 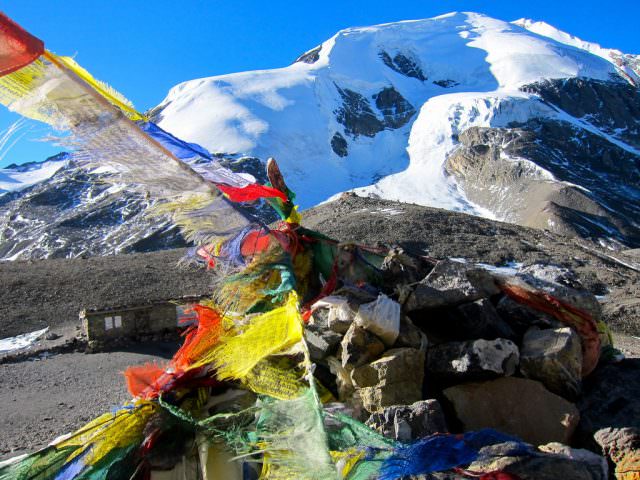 After the trek, the papers read of the risk of a political uprising. It is “tourism year,” so the Maoists are pretending to agree to not do anything for 2011, but not many believe that. Opportunities for visas for workers wanting to slave away in foreign lands are crowded in the paper. Only 320 died last year in Quatar. A paraglider died yesterday less than a mile from where I type.

The opportunities are depressing. The government is depressing. The people have lived through hell and are seeing their country being built into a three-star hotel for assholes like me to come and experience their Himalayan dream. With more than 30% of the children not attending school, the government focuses on tourism in 2011.  I don’t how this will help the core problems, major problems, at all.  It will only hurt more.

I found many things in this country to be urgent cries. Perhaps this is mine.

More photos from this trip can be found here. I also wrote a separate piece with my positive stories from Nepal.  I decided on the trail that these two had no business being published in the same post.